Published the 20 May 2022
Illustration by Tanya Sushenkova 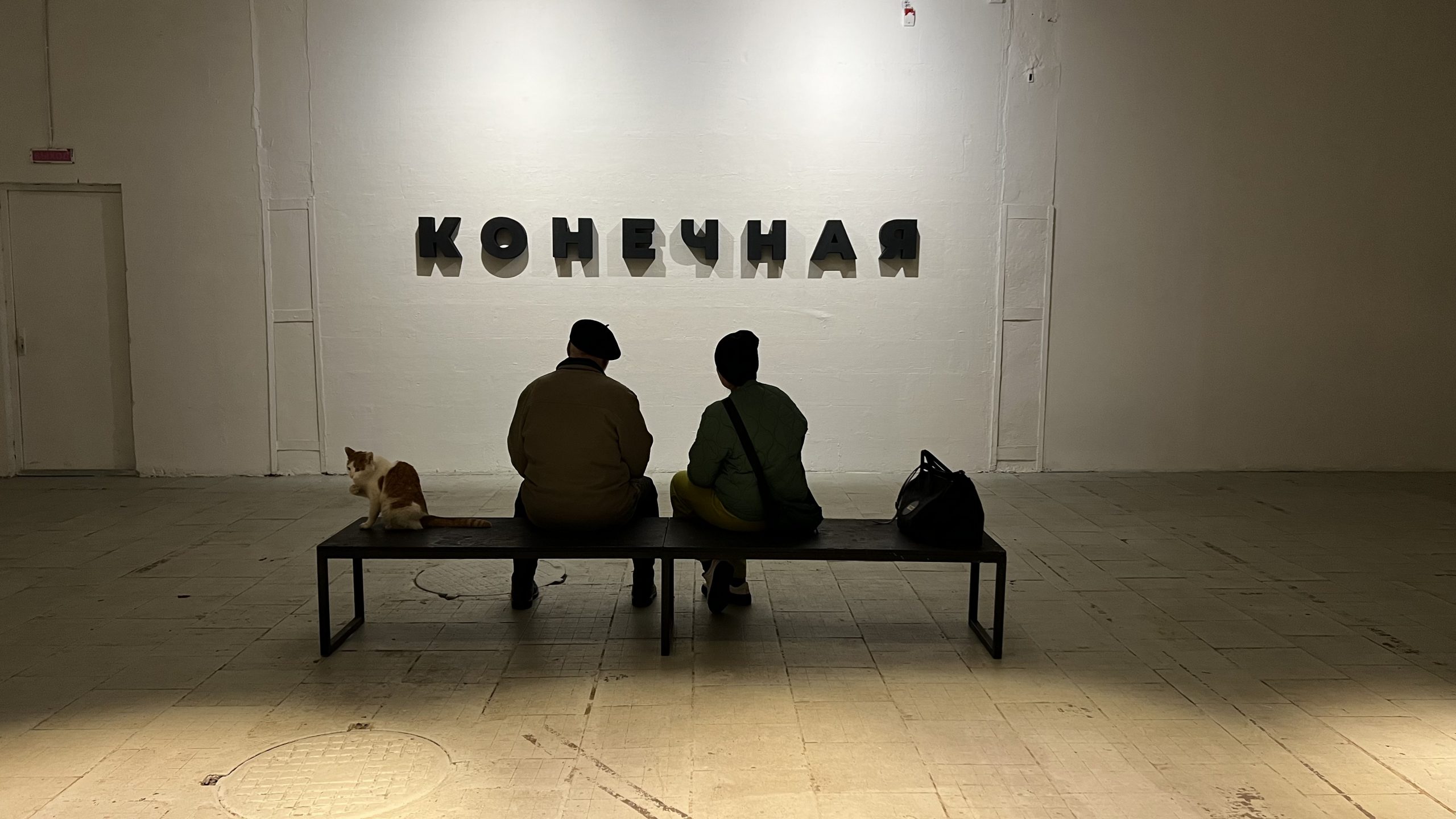 Excuse Me, Is This the “End of the line”? The Train Will Go No Further.

During the nearly two months since 24 February 2022, numerous art events, openings, exhibitions, lectures and projects on the Russian cultural stage have been canceled by their organizers. This wave of cancellations is due to solidarity with the victims of the military conflict on the one hand, and the sudden and immediate devaluation of previously pending narratives and lines of thought in the cultural agenda, on the other. Artists and curators have found themselves in an extremely complex situation where distracted statements, completely ignoring the harsh situation with the humanitarian crisis caused by the war in Ukraine, are viewed as ethically dubious and condemned by a part of the art community. In the same time, openly critical projects may lead to political repression of their authors.

In the current situation, I find it important to share my impressions from one of the exhibitions that opened during this culturally extreme time. The author of the project is a quite young conceptual art group called “POMIDOR,” founded in 2018 by artists Polina Egorushkina and Maria Sarkisyants, and delivering its messages in their self-invented genre of soft politics.

One of the art group’s projects, titled “Subway Station,” was exhibited on April 11th at one of the independent art spaces of the Center for Creative Industries Fabrika. It consisted of a minimalistic set of elements: a long black-colored bench, surrounded by the blankness of white walls. Parallel to the bench, one of the walls had a sign reading “КОНЕЧНАЯ” (“TERMINUS”) in volumetric black letters. At the entrance of the display, there was a poster called “Subway Station” against the background of a yellowish natural landscape and a short text explaining the story of how the display had been created. That story told visitors of an exhibition project with the same name previously planned by the art group, but with entirely different content. Its realization in that form was no longer possible for the artists in the changed world after February 24.

This statement described the moment of experiencing the seemingly abrupt end of the latest epoch in Russian modern art.

Visitors arrived at the opening, some put bags on the bench, others brought wine, but every one of them at certain point simply sat down and silently gazed at the “TERMINUS” sign on the opposite wall. There were many colleagues from art community who came to “The Subway Station” at that evening, such as Sergey Katran, curator, artist and inventor; Svetlana Dorogina, an artist, art critic, curator, coordinator of educational and exhibition projects of the Free Workshops School at MMOMA, Adele Kim, curator, manager, researcher, member of the organizing committee of the Association of Art Residences of Russia and etc. I would like to share the quote of Eva Sterlagova, curator and artist, from her critical note about this exhibition:

“The artistic gesture of the work is an accurate and relevant one. The laconic layout of the station, along with the realization of the fact that we have, apparently, “all arrived”, cause confusion and disorientation in the viewers of the piece. It conveys our shared feelings on the quickly developing and shocking recent events.”

In my view, this statement of the artists is indeed accurately described the moment of experiencing the seemingly abrupt end of the latest epoch in Russian modern art. The fact that Russia had initiated the military invasion to Ukraine has caused a tremendous chain reaction in the established cultural tradition and has resulted in the inability to retain the same artistic practice on the territory of Russia for ethical reasons for a vast number of authors, cultural workers and grassroots initiatives.

Further co-travelling is impossible after arriving at the end of the line, it is now time for individual choices and trajectories, time to leave people and things behind…. The narrative lines of the previously pending agenda, evolving for several decades, have probably reached their terminal stage, leading them right into the depot of history.

The very fact that such a high-quality artistic statement is possible in this situation gives rise to a degree of optimism and hope in the ability of Russian modern art to be reborn through the proclamation and visualization of a new complex reality.

It should be noted that the timely and minimalistic artistic exhibition statement of Polina Egorushkina and Maria Sarkisyants managed, in my opinion, to incorporate several iconic milestones in the development of Russian modern art: Malevich’s suprematic black, Rodchenko’s poster geometry, as well as the laconic dimensional text of Eric Bulatov and other Moscow conceptualists, a submersion of the spectator into a total social-critical installation in the manner of Kabakov, as well as the participatory character of the work, characteristic for the current stage in the evolution of artistic methods.

Let’s reveal this thesis a little more.  Artists use monochrome black in suprematic way for their title “KONECHNAIA” (“Terminus”) and I see in this gesture a dialog line with the iconic first appearance of the “Black Square” by Kasimir Malevich on “The Last Show of Futuristic Paintings 0.10” in 1915. Since that time “The Black Square” contains strong association with the turn or revolution moment in the contexts of the Russian art history.  It’s important that POMIDOR’s show took place in Moscow, where the tradition of Russian conceptualism were origened to replace suprematism on the main artistic scene in the XX century.  That’s why laconic conceptual language of words as the main part of the visual message makes the exhibition of the one work “The Subway Station” the next element in the long chain of great works in Russian conceptual art tradition which was developed by Erik Bulatov, Victor Pivovarov, KOMAR & MELAMID and etc.  Also the way of the construction of the display put visitors into the total installation where there is the whole space not only works on walls became the important part of the artistic message. The total installation like a form of artistic visual language where invented by other classic of Moscow conceptualists Ilya Kabakov as well. It’s really precious situation on the newest stage of Russian contemporary art when the work of emerging artist could have so deep roots in the local art history and be so acutely relevant to current moment in the same time.

Despite the sad context of said art project by the “POMIDOR” art group, the very fact that such a high-quality artistic statement is possible in this situation, with all its destructive influence on culture, gives rise to a degree of optimism and hope in the ability of Russian modern art to be reborn through the proclamation and visualization of a new complex reality.