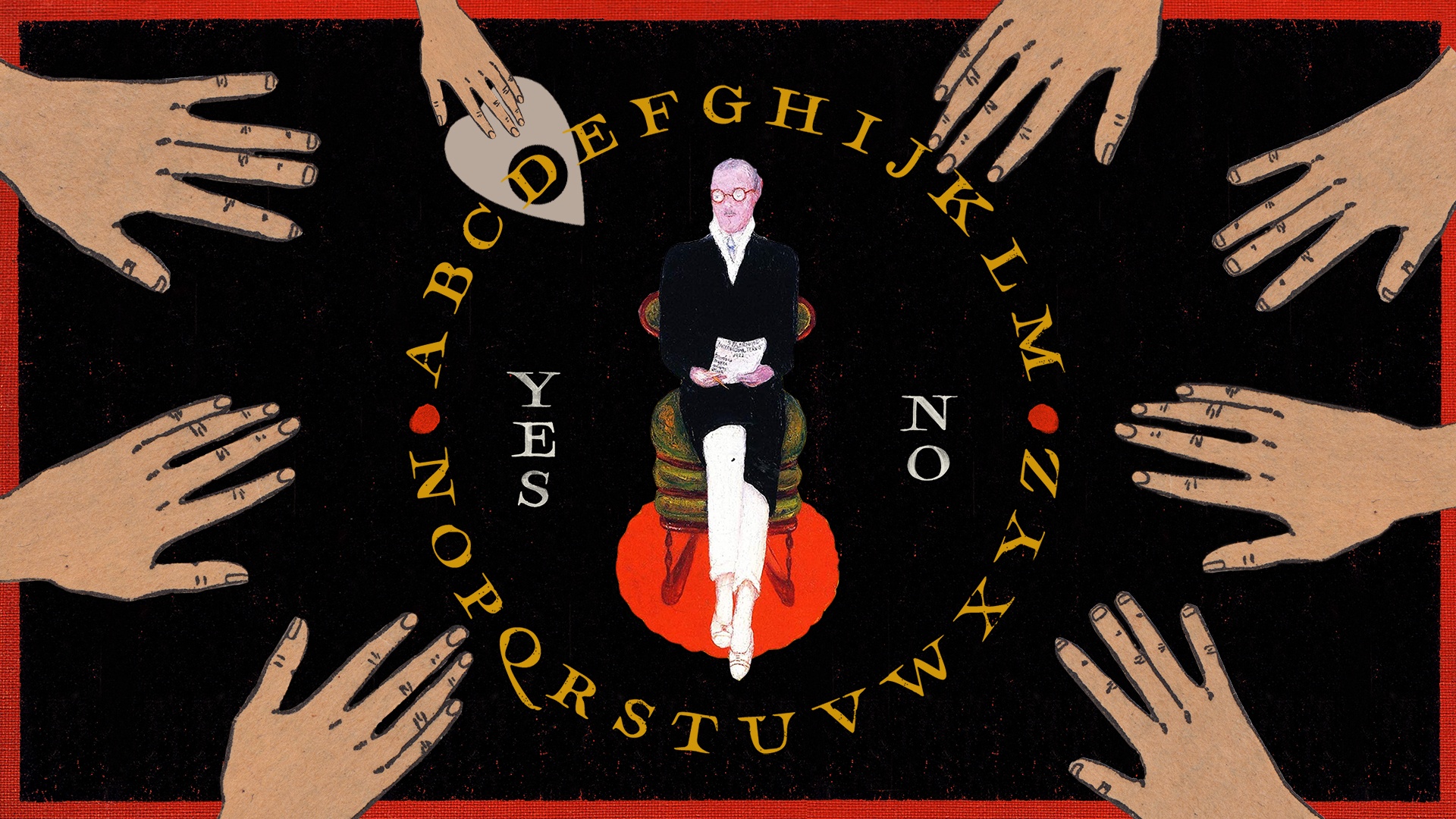 The meanest portrayal of a critic in art has to be Jasper Johns’s small sculpture The Critic Sees (1961), with its open mouths taking the place of eyes behind a pair of glasses. It’s one of the funniest, too, if we’re being honest. My favorite, though, is Florine Stettheimer’s 1922 portrait of the great modernist Henry McBride. Trim and handsome, he floats above tennis courts in a long jacket, paper and pencil in hand—umpiring, or making notes about, the matches below. His eyes peer through red spectacles, watching the action. He is rapt.

Asked once to name my best day as an art critic, that depiction of McBride came to mind. Picking a single day is too daunting, but I can say that the most fulfilling moments have been when I have felt somehow like him in that picture: watching something thrilling, uncertain how it would turn out, scribbling notes. It’s a rare sensation, but I have had it inside the first solo exhibitions I saw by, to pick a few at random, Anicka Yi, LaToya Ruby Frazier, and Darren Bader.

Tennis is not quite the right metaphor for contemporary art, of course, since its rules are firmly established and firm notions of criteria long ago vanished from the critic’s toolkit. Thank goodness. “For me not getting it is part of the excitement,” the curator Massimiliano Gioni once said. I’m with him! Like a lot of my colleagues, I write to try to figure out why an artwork has bowled me over, angered me, or otherwise stuck with me. A worthwhile goal of criticism now—at a time of brutal, binary divisions—is to convey that excitement about uncertainty, I think.

“For me not getting it is part of the excitement,” the curator Massimiliano Gioni once said. I’m with him!

I enjoy the art viewing part of the job a great deal more than the art writing part of it, but the writing is, alas, required. Which is fine. Getting paid to write about art still seems miraculous. Another way I could answer the question about my best day is to say that it is literally any day I get offered the chance to write about art for some reasonable amount of money. I am not really being facetious. It is brutal out there.

Outside of a handful of newspapers, staff critic jobs essentially do not exist anymore (they barely ever did), and rates for reviews at most trade publications are the stuff of dark comedy. The obvious consequences are that few can afford to develop a critical practice and that a limited pool of perspectives predominate.

The common refrain is that criticism has lost its influence and its bite—that no one cares. But there are signs to the contrary. Commercial galleries appear to spend more money each year on publicists and PR companies, filling the inboxes of writers with press releases and invitations. Sometimes they even ask for reviews of exhibitions. In the strange game of consensus-making in the art industry, the review still has some role to play. (I like to picture a giant Ouija board with dozens of hands on the planchette. A few too many of those hands belong to wealthy collectors, but the writer’s miniscule fingers can sometimes make it move.) And criticism still grabs everyone’s attention every once in a while, opening up fruitful arguments. (Like semi-recent pieces by Dean Kissick and Taylor Renee Aldridge, to name two.)

It is strange to live at a time when writers can actually know which of their reviews has been read the most. For me, it’s one of a silly Damien Hirst show in Venice. By one measure, that attention represented a great day. However, I spent maybe two hours on it, while weeks of effort have gone into comparatively obscure projects, so I have mixed feelings.

The common refrain is that criticism has lost its influence and its bite—that no one cares. But there are signs to the contrary.

My worst day in this profession? I did not love getting laid off last March from a luxury-minded art and design magazine that I had just joined, but amid a worldwide pandemic it was hard to work up too much self-pity.

An eternal optimist, I try not to believe in bad days, but starting out as a writer, I felt awful receiving negative feedback about reviews. Now, at least when I am confident in my convictions (which is not always the case), I love it. Years ago, I said some blandly negative things about Banksy in a documentary, and every few months, I still hear from one of his acolytes, which delivers a jolt of electricity. It keeps me going.

The most horrible experience you can have as an art critic is to realize that you have been absolutely incorrect about an artist, having misunderstood their work by failing to delve into it deeply enough. That has happened to me, and when it does, that Johns sculpture—all mouths and no eyes—haunts me. But I would prefer to keep those specific anguishes private while I correct the record.

The real impossibility in picking best and worst days in this field is that the serious joys and heartbreaks build up only over time. An artist you wrote about early on keeps getting better. They get a museum show or sell something for a large sum, securing them a certain place in the canon. You were right! In other instances, their art falls off (in your humble opinion), or doesn’t catch on. You tried to get people on board. You failed.

I am okay losing some fraction of the time, but my nightmare scenario is losing touch: rather than being pleasantly confused by new art, being lost around it, unable to identify it, or incurious about it. To guard against that, I regularly try to remember how exhilarating it was to first come across some particularly beguiling works. One I revisit frequently is a sound piece by Ceal Floyer that played on speakers in an otherwise empty gallery at Documenta 13 in Kassel, Germany, in 2012. It’s a short, edited loop of Tammy Wynette singing these words: “So I’ll just keep on/’til I get it right.”

This website uses cookies to improve your experience while you navigate through the website. Out of these, the cookies that are categorized as necessary are stored on your browser as they are essential for the working of basic functionalities of the website. We also use third-party cookies that help us analyze and understand how you use this website. These cookies will be stored in your browser only with your consent. You also have the option to opt-out of these cookies. But opting out of some of these cookies may affect your browsing experience.
Necessary Always Enabled

Any cookies that may not be particularly necessary for the website to function and is used specifically to collect user personal data via analytics, ads, other embedded contents are termed as non-necessary cookies. It is mandatory to procure user consent prior to running these cookies on your website.